Tips
Some tips on "how to evaluate a business"

I am often asked how to value a company at such an early stage. When I took my MBA I thought I would leave with a great formula to know how to answer this question.

But the truth is, in the beginning, the inputs which structure the whole foundation of a company’s valuation are completely relying on our own vision. We’re the ones who decide the initial inputs. So the question should be: do we really believe in these values? Is there a reasonable logic, a reason, a structure behind certain decisions such as market size, penetration rate and evolution over the years, or the main source of revenue for the company? Here are some tips to achieve reasonability.

1- You think the size of your market is that obvious. Think again.

Throughout my career, I think I've never seen a startup hit the market size at first. As a rule, the first try to quantify market size often fails to narrow down based on what the company actually offers. For example, let's imagine a company that does something as specific as selling coffee that is better for people’s health because of whatever component they were able to introduce into the product. The size of the market in this case is not the whole coffee sales in Europe (as sometimes one makes the mistake of assuming that geographic segmentation is enough to say that the market is already specific) over the last year, as one might think at first. On this case, you will probably have to think of other similar product categories, such as drinks with similar components or value propositions, and cross-check sources until meaningful logic is created. The realistic factor here is very important: if we don't believe in our assumptions, potential investors won't believe it either, not to mention we should be the first ones to want to know what the real size of our market is.

Do you have competitors that have been around longer than you? Great! This means that you probably won’t have to spend as much time around sales estimations and penetration rate assumptions. What I usually do is try to find a company that is as close to mine as possible in terms of business model and structure, even though its product/ services may not be exactly the same (hopefully). For example, if I am creating a marketplace related with short-term tourist accommodation, one step could be searching for Airbnb and try to find their initial sales progress, which geographic market they were in at the beginning, and how sales have evolved to the present day. Then it's a matter of assuming more or less the same evolution, adapting the values ​​to our own market, and bringing a dose of realism to this math.

3- Beware of exaggerations in the starting evaluation

As I began by saying, evaluation at an early stage is almost always whatever we say so. Even with a logic behind the numbers we fit into our super Excel, the truth is that it's all based on our own choices. However, an overstatement at an early stage can lead to an investment that a startup might not be prepared for, which is usually accompanied by unrealistic metrics required by those who have invested in the company. The result of an exaggerated assessment? In the end, if the metrics you proposed are not met, you risk devaluing our company, and possibly having early investors owning more of your company through the proportion their invested amount VS the updated value of the company. Apart from the obvious negative impact of not fulfilling the goals you set yourself, there are in fact more objective consequences on compromising to megalomaniac results, such as the possibility of losing control of your startup at such an early stage. By being realistic and sticking to metrics, on the other hand, you get an opportunity to have investors who are happy and willing to follow a second round of investment, which may then be more focused on growing something that has been proved to work.

Having closed rounds of investment in a total of more than 1 million euros, either for our own startups or helping other businesses, we know how intimidating it may be to meet potential investors. That is why we've created Chiefmetric - a financial planning tool designed specifically for startups. We invite you to give it a try!

Wishing you the greatest success,

Share
More posts
Tips
Free business plan template step-by-step
Are business plans really needed? We say they are, and we’re making this template available for free so you have no excuses to not smash through it.
Tips
Financial modelling made easy: a step-by-step guide using Chiefmetric
Financial models could be defined as the translation of a business strategy into numbers.
Help
Chiefmetric: The Business Planning Tool Your Company Needs
Interested in generating professional financial projections, securing investment, and getting insights to help you reach your goals? Chiefmetric is here for you.
Subscribe amazing content and get one template for free.
Set the basics: get our One Pager template in your email for free. This template was used by dozens of startups and includes useful tips to summarize your business vision. 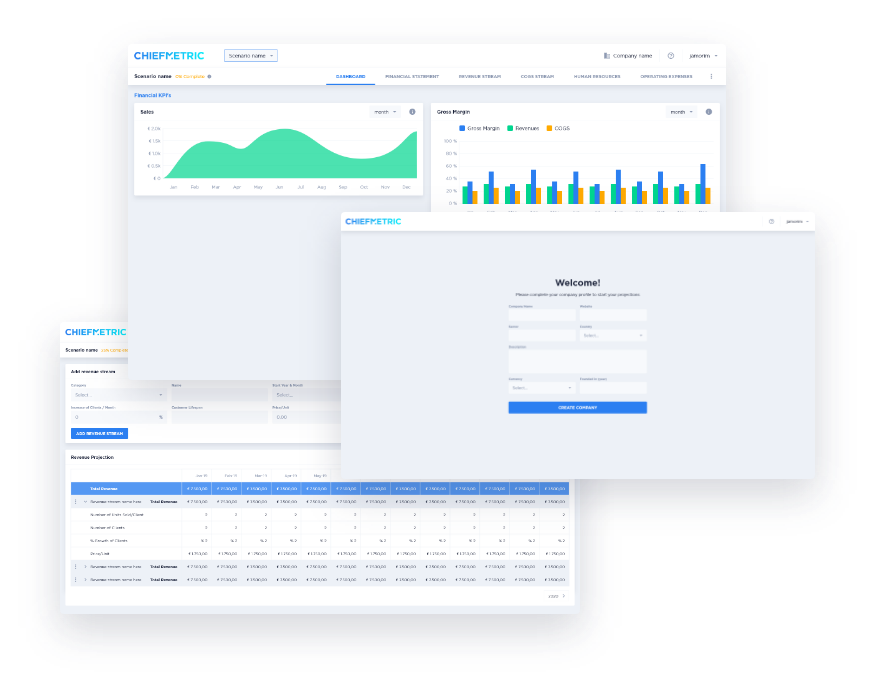 We're almost there!
Chiefmetric is fine-tuning its powerful new features and will be ready to launch in a few days. Meanwhile, you can follow our latest developments by subscribing to our newsletter.
Subscribe amazing content and get one template for free!